In this case, the charges against the Appellant, Chief Judicial Magistrate (CJM) of a District in Gujarat, was involved in rendering of decisions motivated by corrupt practices or by oblique motives.  The two criminal cases which were tried by the Appellant CJM involved offences under Section 135 of the Customs Act, 1962 related to the smuggling of 275 silver slabs worth ₹.5,86,50,620/-. The offence invited a punishment of imprisonment for a term which may be extend up to seven years and with fine. But in the absence of any special and adequate reasons, such imprisonment should not be less than three years. Disciplinary action was initiated against the CJM.

The explanation of the Appellant was that he was recently promoted to the cadre of CJM and was not aware of the provisions of Section 135. This explanation was not accepted by the Disciplinary Committee and also by the Full Court of the HIGH COURT OF GUJARAT (Respondents). They were of the opinion that as a judicial officer who was in service for over fourteen years, the Appellant could not have been unmindful of and was duty bound to have read the governing provisions of the law under which the offence was sought to be established. The Appellant awarded sentences ranging from three months to five years of imprisonment to different accused. No reasons appear from the record of the judgment, for awarding less than the minimum sentence prescribed. They opined that it was inconceivable that a judicial officer would do so in two successive trials without apprising himself of the law or the punishment provided by the legislature.

Also read my book on corruption based on my autobiography:
A FRAUD IN THE INDIAN CONSTITUTION http://www.amazon.in/dp/9352353986

In the appeal filed by the CJM, the Supreme Court after duly examining the judgments rendered by the Appellant CJM and merit in the finding of the High Court, it was held that the Appellant paid no heed whatsoever to the provisions of Section 135 under which the sentence of imprisonment shall not be less than three years, in the absence of special and adequate reasons to the contrary to be recorded in the judgment of the Court.  Most significant is the fact that the Appellant imposed a sentence in the case of each accused in such a manner that after the order was passed no accused would remain in jail any longer.  Two of the accused were handed down sentences of five months and three months in such a manner that after taking account of the set-off of the period during which they had remained as under-trial prisoners, they would be released from jail. The Appellant had absolutely no convincing explanation for this course of conduct.

The Appellant had been dismissed from service. The submission of the Appellant was that having regard to the fact that he had an unblemished record of service, the imposition of the punishment of dismissal would be disproportionate to the misconduct which had been found to be established. Rule 6 of the Gujarat Civil Services (Discipline and Appeals) Rules 1971 enunciates disciplinary penalties.  Among them is (i) compulsory retirement; (ii) removal from service which shall not be a disqualification for future employment under Government; (iii) dismissal from service which shall ordinarily be a disqualification for future employment under Government.  Having due regard to the nature of the misconduct which has been found to be established and the totality of circumstances SC was of the view that the punishment of dismissal should stand substituted by an order of compulsory retirement. The Appellant has attained the age of superannuation and would be entitled to his retirement benefits on that basis. They accordingly allowed the Appeals in part.  The judges also confirmed the judgment of the High Court in so far as it rejected the challenge by the Appellant to the finding of misconduct.  However, for the reasons which they had indicated above they directed that the order of dismissal from service should stand substituted with an order of compulsory retirement which should take effect from 14 July 2009, the date on which the final order of penalty was imposed upon the Appellant. [Reference: SUPREME COURT OF INDIA, Civil AppeaL Nos 6116-6117 OF 2016 - Arising out of SLP (C) Nos.34674 -34675 of 2012- judgment dated JULY 12, 2016

In para 2 of the decision of the cabinet meeting chaired by Prime Minister published recently, the fact was falsified as follows, “In the past, the employees had to wait for 19 months for the implementation of the Commission’s recommendations at the time of 5th CPC, and for 32 months at the time of implementation of 6th CPC. However, this time, 7th CPC recommendations are being implemented within 6 months from the due date”. (Copy attached- http://finmin.nic.in/7cpc/7cpcGazetteNotification.pdf). My first question is whether it is a cabinet decision to be notified publicly or a cheap political publicity tactics? And whether it is a statement or a “decision” and is it true? According to me it is a Gazette Notified false statement issued publicly as follows:
In the case of 6th Pay Commission, Report was submitted to the Government on 24/03/2008. Government decision was published on 29/08/2008. Time taken was 5 months and 5 days.
In the case of 7th Pay Commission report, it was submitted on 19/11/2015. Government decision was taken on 29/6/2016. Time taken was 7 months and 10 days. Yet credit goes to the present government for taking early decision. Actually it took 2 months and 5 days more than the previous government to decide on the issue, that too a totally simple form of CPC report compared to the earlier reports.
Therefore, it is my request to remove the false self-glorifying statement Gazette Notified in the guise of a cabinet decision. 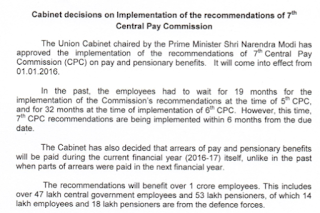 *****
N.B.: also read my following:-
1. Book: A fraud in the Indian Constitution – https://www.facebook.com/afraudintheindianconstitution/?ref=hl