BHOPAL GAS LEAK DISASTER AND MY CONTEMPT OF SUPREME COURT

It was in February 1989. I had written a letter to the Editor, Times of India (see the paper cut attachment) criticizing the Supreme Court order dated 14-02-1989 related to the much famous Bhopal Gas Tragedy in which thousands were dead and critically affected. It is coming to my memory in the context of the present decision of the Supreme Court of India holding Shri Prashant Bhushan guilty of contempt for derogatory tweets against judiciary.

It was published by the Times of India in its News Paper dated 22-02-1989 in the editorial page. Some others were also written on the subject. On the very next day of its publication, I noticed another news column quoting one of the Judges of that Bench of the Supreme Court which pronounced the order to the effect that Contempt of Court proceedings were being initiated against the WRITERS. But nothing had happened. On the contrary, that Judgement was modified in a later Review Petition. The the letter is given below: 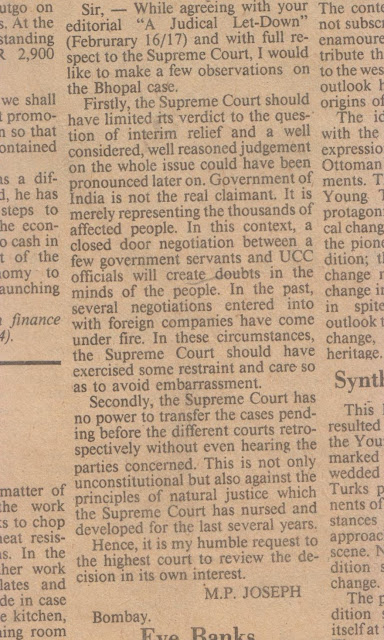 While agreeing with your editorial “A Judicial Let-Down”(February 16/17) and with full respect to the Supreme Court, I would like to make a few observations on the Bhopal case.

Firstly, the Supreme Court should have limited its verdict to the question of interim relief and a well considered, well reasoned judgement on the whole issue could have been pronounced later on. Government of India is not the real claimant. It is merely representing the thousands of affected people. In this context, a few government servants and UCC officials will create doubts in the minds of the people. In the past, several negotiations entered into foreign companies have come under fire. In these circumstances, the supreme court should have exercised some restraint and care so as to avoid embarrassment.

Secondly, the Supreme Court has no power to transfer the cases pending before the different courts retrospectively without even hearing the parties concerned. This is not only unconstitutional but also against the principles of natural justice which the Supreme Court has nursed and developed for the last several years.

Hence, it is my humble request to the highest court to review the decision in its own interest.

(N.B.: The judgement was later reviewed and revised in a later Review Petition.)

1. A FRAUD IN THE INDIAN CONSTITUTION https://www.amazon.in/FRAUD-INDIAN-CONSTITUTION-M-P-JOSEPH-ebook/dp/B00SQKTADY  (paperback online sale suspended for the time being)